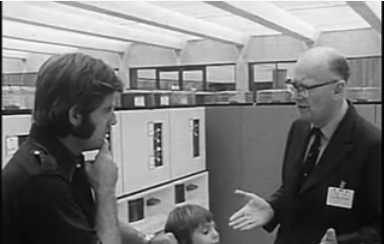 Before going to Capitol Hill…

In a 1974 interview Arthur C. Clarke told ABC that every household in 2001 would have a computer, announcing such marvels as “you can live anywhere on earth and do your business…!” This in reality may only have just been realized on a large scale in 2020 through the advent of COVID-19 imposing widespread ‘work from home’ policies. Amazingly, many wonders of the internet were clearly predicted in this video of an interview with ABC. See Wikipedia for ABC Clarke predicts internet and PC.ogv and History of the Internet.

We are yet unpacking the marvels the internet avails. To wit, many are referring to this as the Fourth Industrial Revolution – it holds enormous promise of dramatic changes improving lives globally. We can say these so-called ‘updates’ are already well on their way, or indeed are already here in one form or another.

What else is now on the table however, is what are lawmakers going to do about it, how will affected regulatory agencies respond and implement statutory changes, and what kind of impact will befall the citizenry? Either or both (ie – technical or legal) of these changes have enormous potential to make life much better (or worse!). So it is important now as ever for there to be thorough, careful deliberation to navigate through these momentous times.

Infrastructure Bill and US Senate Request for Input

All this is in response to H.R.3684 – Infrastructure Investment and Jobs Act (aka “Infrastructure Bill”) and the recent US Senate’s request for input.  Who knew that ‘infrastructure’ includes such things as our digital highway, aka the internet. The Senate version expands upon the House’ original proposal and updates laws regarding trade in digital assets.  Link to the text here and <ctrl-F> to find ‘Sec 80603 – Information reporting for brokers and digital assets’ to see the opening legislative salvo.

If I understand correctly, and it’s totally ‘spaghetti code’, this legislation would:

Andreessen Horowitz’ comments dated September 27, 2021 claim that this proposal didn’t go far enough! Many of us may not have any idea what a DAO is, so take a look at Wikipedia’s Decentralized Autonomous Organizations (DAOs):  or What is a DAO courtesy Investopedia to get down the interweb highway. Then, read on from the comments for just one item that warrants very careful consideration:

“We propose to provide DAOs with a recognized entity status under the Internal Revenue Code, giving them a pathway to legally establish themselves in the United States and the tools they need to continue to grow here, and allowing for more efficient taxation as appropriate.”

“(E) …default classification for federal tax purposes for a qualified decentralized autonomous organization shall be a corporation.”

Why default to a corporation?  There are numerous types of DAOs – many to which ‘corporation’ does not fit at all (services or charities for instance?)  Since practically ANYTHING can have its own ‘digital twin’ – wouldn’t this have the effect of subjecting EVERYTHING to oversight of tax authorities? Could we borrow a line from the medics Hippocratic Oath and let’s ensure we don’t make life worse than it is today? Is that what many of us (once we understand) want, need and desire to happen?  Appearances are this would invite the potential for enormous amounts of regulatory oversight.

Here’s a hypothetical – tell me if this is outlandish: what if two DAOs execute a digital asset exchange, and they somehow meet the IRS’ definition of being ‘commonly controlled’?  (It seems plausible that various parties could be involved in alternative DAOs with some interconnected relationship).

That would evoke transfer pricing requirements (IRS Sec 482) – intended to prevent evasion of taxes and ensure taxpayers clearly reflect their income.  Corporations are clearly subject to these  – in addition to numerous other reporting and similar requirements.  In sum – tax authorities globally rush to the table to ensure they get their ‘fair’ share. So we open an international tribunal of countless authorities garnering whatever is deemed a fair share in tax revenue, to avoid erosion of the local tax base. Wow! That would be quite a thicket.

Conclusion – if some assumptions here are correct – today’s regulatory world just collapses under the weight of it all… How about all this be given the light of day so we can collect complicated and inter-related factors so stakeholders can understand the impact and we all distill through an untold variety of concerns that undoubtedly emerge here. It’s a relatively recent development that the Internet has seen tax matters settled – it was ‘free’ for the first years. Why don’t we take that approach rather than advocate a rendering to Caesar before he even knows which of us are on the menu?

Let’s give this some careful deliberate dialogue to come up with a solution at least prima facie we might be able to survive in the long road ahead. Just some thoughts…

Freight Payment: Technology and the Race to Improve Billing Accuracy